Hodgkin's Lymphoma, also called Hodgkin Disease, is a cancer of the lymphatic system. The lymphatic system forms part of the immune system. It contains specialized white blood cells called lymphocytes that help protect the body from infection and disease. Hodgkin's Lymphoma arises when developing lymphocytes undergo a malignant change, and multiply in an uncontrolled way. These abnormal lymphocytes, called lymphoma cells, form collections of cancer cells called tumours, in lymph nodes (sometimes known as ‘glands’) and other parts of the body.

Hodgkin lymphoma is distinguished from all other types of lymphoma because of the presence of a special kind of cancer cell called a Reed-Sternberg cell.

Approximately 9,190 Americans were diagnosed this form of lymphoma in 2014.


And if you didn't notice...their color is purple! 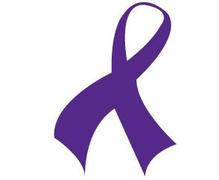